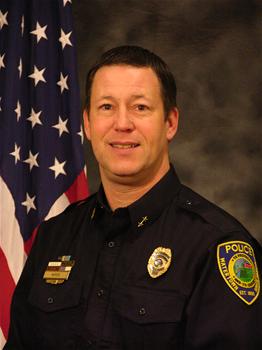 Chief of Police Chief Lee McPeek was born and raised in Watertown, South Dakota. He is a 1984 graduate of Watertown High School. He graduated from Alexandria Technical College in Alexandria, Minnesota with an Associate Degree in Law Enforcement in 1991. Lee began his Law Enforcement career as a deputy sheriff with the Hand County Sheriff Office in Miller, South Dakota, serving from March 1992 until March 1994. He began his career with the Watertown Police Department on March 28, 1994. Lee is a second-generation police officer. His father, Laverne McPeek, served the Watertown community for over 30 years. LaVerne served as the Chief of Police for fourteen years, retiring in 1994.

Prior to his promotion to Chief, Lee served as Assistant Chief of Police, Lee led and managed all operational functions of the department to include the Patrol Division and the Criminal Investigations Division. Lee directly supervised five 1st-line supervisors (Sergeants). He was also responsible for the performance of four patrol squads, which consists of 4-5 patrol officers, and one investigative squad which consists of 4 detectives. Lee oversaw and was involved in many of the department’s assignments, units, committees, and teams to include the following; the budget team, facility planning, Police Officer training program, traffic safety, DUI detail, accident reconstruction, crime scene team, sex offender registration, and the bike patrol team.

Prior to his promotion to Assistant Chief, Lee served as a Captain of the WPD between 2008 through 2011. He led and managed the Patrol Division, as well as, the Administrative Division of the WPD. During his tenure, he has overseen every facet of the WPD to include patrol and investigative operations, 911 communications and records management, technology development and oversight, police administration, budget preparation and oversight, records and evidence management and keeping, grants management and research, internal affairs investigations and discipline, employee performance and development, reserve officers’ functions, and training to include high liability areas such as firearms. Lee was instrumental in the planning and oversight of the new WPD facility and was responsible for the design and functionality of the 911 Communications Center and WPD technology.

Lee served as a Sergeant between 2000 through 2008 during which time he led and supervised Patrol Officers, the DARE Program, Field Training, Firearms, and the 911 Center. He also wrote and managed several of the department’s grants during this time.

In 2011, Lee completed the International Association of Chiefs of Police, Leading by Legacy Program. In March 2010, Lee graduated from the 240th Session of the Federal Bureau of Investigation’s National Academy, in Quantico, Virginia. Lee holds an Associate Degree in Law Enforcement from Alexandria Technical College in 1991.

Lee and his wife Lisa have three children. They enjoy spending time as a family vacationing, watching and participating in sporting events and attending church events. Lee enjoys hunting, fishing, golfing, and playing softball in his spare time. He is also a member of SD Ducks Unlimited, Codington and Clark County Chapter’s of Pro Pheasants and coaches youth softball.