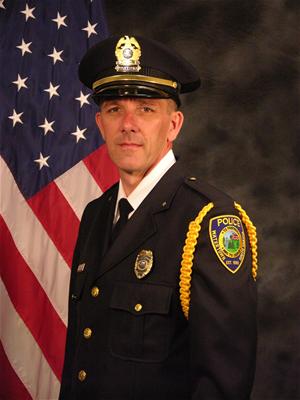 Assistant Chief Tim Toomey was born and raised in Rochester, NY. He is married to Cheri and has two children, Joseph and Katelyn. Tim served in the United States Air Force from 1989 to 1993. He was stationed at the Grand Forks, North Dakota Air Force Base as an Offensive Avionics Technician on the B1 Bomber. After serving, Tim worked as a Journeyman electrician until joining the Watertown Police Department in 1999. He is a graduate of Mount Marty College with an Associates Degree in Criminal Justice and is working toward a Bachelors degree.

Tim began his career as a Reserve Officer in October 1999 until August 2001 when he became a full-time officer. As a patrol officer Tim was a Field Training Officer, DARE Instructor, SWAT team member, Bike Patrol member, Accident Reconstruction Team Member, DWI Team member and took on many other responsibilities.

In August of 2004, Tim was assigned as the School Resource Officer (SRO). Tim worked district wide at all the schools in the community.  Tim was instrumental in developing the SRO program and took pride in helping Watertown's youth succeed. In January 2007, Tim was promoted to the rank of Corporal and was assigned back to the Patrol Division.  In August 2007, Tim was assigned as a detective with the Criminal Investigation Division. During that time, Tim investigated major crimes that occurred in the Watertown area including sex crimes, property crimes and crimes against persons. In October 2007, Tim was promoted to Detective Sergeant.  As the Detective Sergeant, Tim supervised four detectives. Tim was responsible for case management and investigating major crimes in the Watertown area. Tim is a member of the Internet Crimes Against Children Task Force (ICAC).  He has received extensive training in the field of digital evidence and the investigation of computer crime. Tim works closely with Federal, State and Local law enforcement protecting children and is a trained Digital Forensics Examiner.  In July 2010, Tim completed the International Association of Chiefs of Police, Leading by Legacy Program and became an instructor.

In September 2017, Tim graduated from the 269th session of the FBI National Academy in Quantico, Virginia. The FBI National Academy is a highly acclaimed professional course of study for U.S. and international law enforcement managers nominated by their agency heads because of demonstrated leadership qualities. The 10-week program—which provides coursework in intelligence theory, terrorism and terrorist mindsets, management science, law, behavioral science, law enforcement communication, and forensic science—serves to improve the administration of justice in police departments and agencies at home and abroad and to raise law enforcement standards, knowledge, and cooperation worldwide.